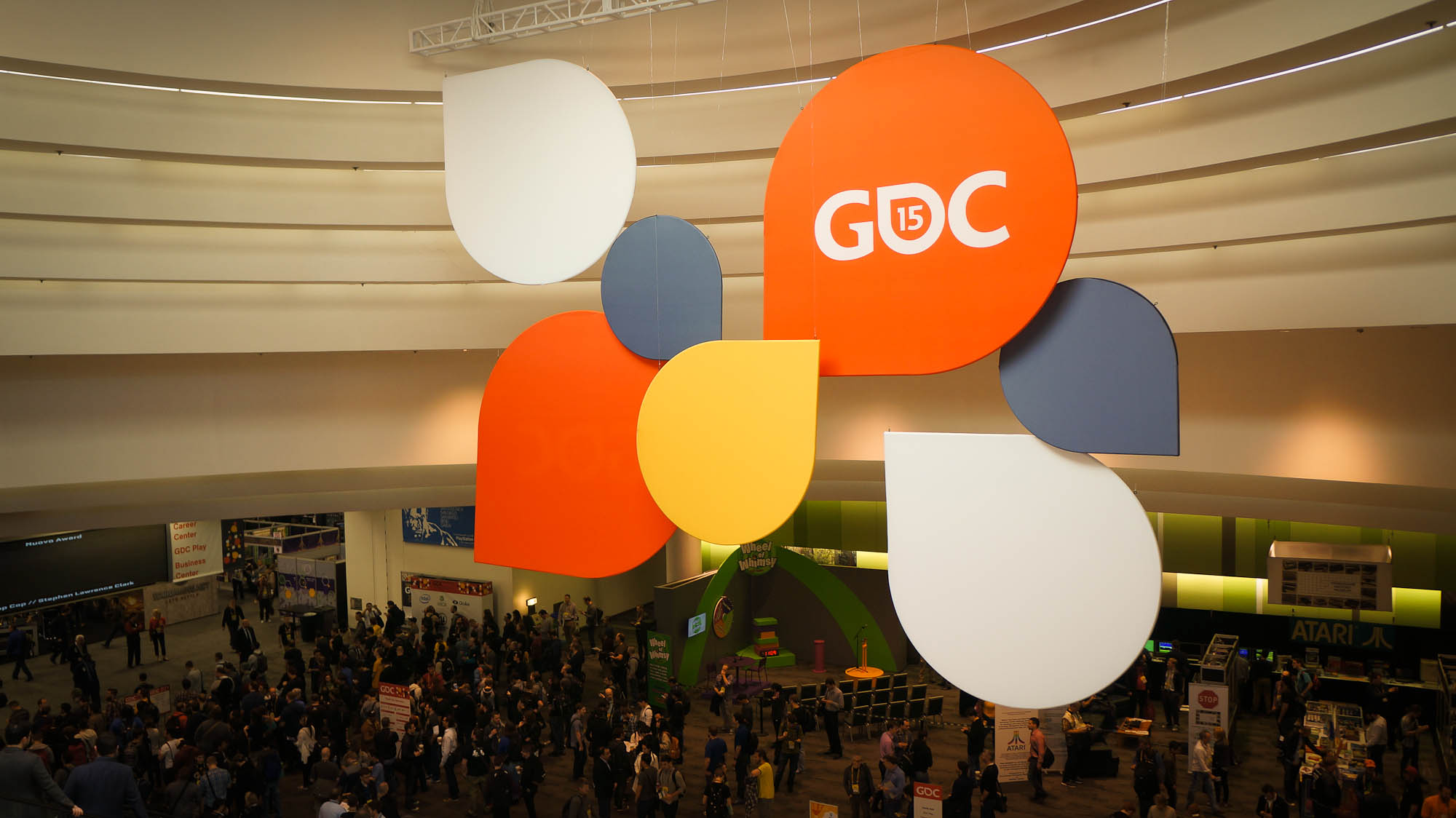 Now onto the GDC.. they say it was big but you never really know how big until you get there. The GDC was in three buildings with parties and events scattered through out the city. I also attended Game Connection which was running at the same time at the Metreon. This was very similar to Casual Connect, where you would meet a lot of publishers, middleware companies and indie game developers. Met some people doing amazing work on games and also stumbled across a few people I met in Amsterdam. When night comes all the mixers start and people come out to mingle. First event I hit was a GDC Pitch night happy hour, where you get up on stage and show off your game. There was no structure to it, which was cool, so you could just get up and show your stuff. I met this nice guy, Rob Silva was his name, comedian and Unreal tutor. He got up and pitched his game, did a good job of it too. I had some wine, just a few glasses. Then he convinced me to try and pitch as well. For those who know me, know I am definitely not the type to speak in public. But what the hell.. I moved before I had time to think about getting nervous. So I got up on stage and pitch my game. I think I did okay, from what I remember. People came up to me afterwards curious about GoatPunks. I ended up meeting a few folk from Denmark pitching a game called Drakk Navis. After the crowed started to disperse Rob and I ended up moving on the Crossy Globe event. We were a bit earlier but ended up bumping into the guys from MiniMega and SMG studios. Had more drinks while waiting for it to open, finally got into Crossy Globe. Aussie everywhere, its was chaos. As you can tell my recollection for these events start to disappear as the night continues. It must be jet lag (wink).

Tuesday was another Crossy Road event, but this was more chilled with a stage interview with the creators Hipster Whale and publisher Yodo1 on how they made Crossy Road a success. Super informative talk, a lot of things to keep in mind when developing my next game. Manage to talk with a lot different publishers there and met a lot of the Yodo1 folk. Next stop was Touch Arcade in the hotel lobby. I was super keen on making it to the Touch Arcade event, for the sticker swap. I had my GoatPunk stickers ready to go, I ended up getting there pretty late but there was still loads of people to exchange stickers with. Everyone was super happy and I ended up getting a whole bunch of selfies with everyone. At some point I ended up at the death star having a drink with SMG. You can probably start to notice a trend as my evening descriptions become a lot less detailed and a lot more fuzzy.

Wednesday, the expo floor was open and I was running around the whole GDC play and expo like a mad man. I tried to pace myself and go slowly, but I ended up visiting nearly all the booths in one day. I got so much swag from everyone, it was awesome. lots of extra large shirts and touch capacitive pens. Most notable of whom where at the GDC play was ‘Space X’. I asked If I could work there, but they said I was Australian so It probably wouldn’t work out with there being military secrets and all. Upset. I could have filled them in on how to create a flux capacitor, oh well. They let me sit in there cockpit which was good enough for me. From there I wandered around the Indie game booths and payed a visit to the MiniMega showcasing there ‘Bonza’ game which was newly partnered with National Geographic, and also SMG displaying two games, one of which was a cooperative puzzle game product of a Game Jam by Patrick C and the other was called ‘One More line’. The events for the night include a mixer by TrialPay, then an artist party hosted by PolyCount. To finish it off I ended up at the Google Play party. They had a massive revolving couch, a slow mo booth, and bluetooth speaker giveaways, Thanks Google.

Thursday, started late, went to the Big Indie Pitch but wasn’t earlier enough to be apart of the pitching. It was a lazy day. Everyone looked like they were in the same state I was. All I could hear was people talking about how their feet where going to fall off from all the walking. I went to the Zendesk mixer later on that day and bumped into Daniel G. Hanged out for a bit then had some tiramisu cake at the CheeseCake Factory in Macys Union Square with the guys from Many Monkeys. They ate their meal as fast as they could so we could catch the premier of Game Loading, a documentary about indie game developers. This was the perfect movie for moment we were in, great job guys.

Friday came, everything was winding down. Hanged with Ryan from Many Monkeys most of the day, met up with other aussie devs mostly from Melbourne. I’m glad I went to the other side of the world to make new friends that are actually right next door. Before I started this journey I had no idea there was a game scene in Australia. I was tucked away in the Blue Mountains just working on my own stuff. Last I heard was all these big game companies dismantling and everyone moving overseas chasing the jobs. I’m happy to hear that there is such a vibrant community of game developers in Australia, it completely changes the way on how I look at my home country. Its like discovering a rare item that was always in your inventory.

Mission for the GDC was to show GoatPunks to as many people as possible, get a job a SpaceX, make new friends, get connections and become familiar with the games industry.  Mission 90% completed, maybe next time SpaceX, next time.

Crossy Roads, Taking over the world.

Crossy Roads, Behind the Scenes

View from the DeathStar

Space X, The highlight of my trip.

The Voxel Agents – Train Conductor, Really nicely put together game to geek out on.

Red Katana – Fallen, This game looks epic, can’t wait till its out.

Glyphite, Cool guys with a clever font application for web

Tinimations – Klang, One of the coolest game I’ve ever seen.

SFPD, Reminds me of Beastie Boys

Decking out my skater with stickers from the GDC